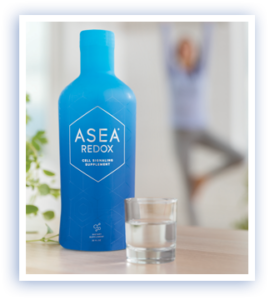 One case lasts 1 month at 2 oz twice a day 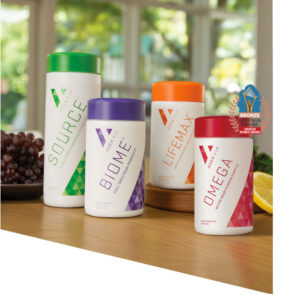 Designed to Work with Redox 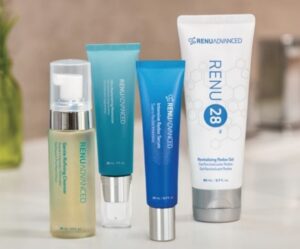 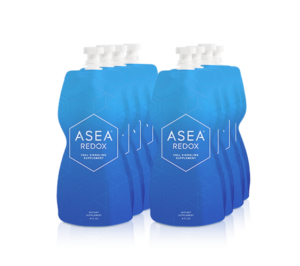 100% money back guarantee for 30 days, if you buy direct from the factory.  You get wholesale prices as a Preferred Customer or Associate with autoship, and you can collect points for free product. 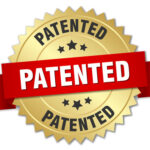 The Redox Cell-Signaling technology is patented and only available from ASEA.

Based on Redox Cell-Signaling, a Cellular Renewal Technology

Your cells are breaking down.  Healthy lifestyle or not, no one escapes the consequences of aging.  Although you may fell well, the effects of cellular breakdown are sneaking up on you.  Current research shows that environmental factors such as stress, diet, the air we breathe, and aging can actually turn genes off, meaning the genetic instructions that dictate healthy body functions don’t get through.  The consequences can manifest in every system of the body. 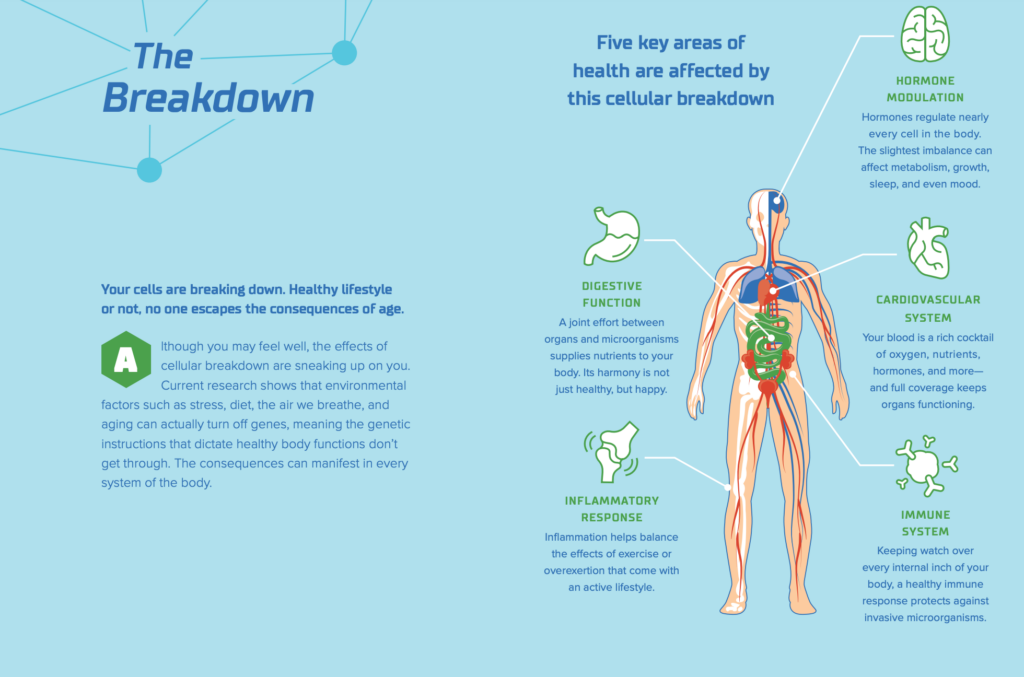 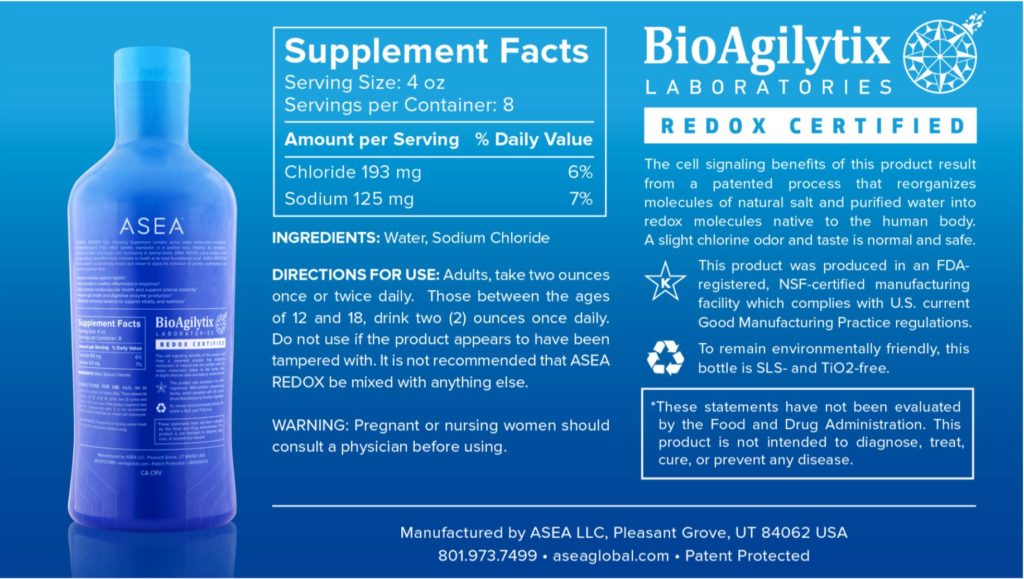 Produced in a FDA-registered, NSF-certified facility

Including explanations from doctors and scientists

ASEA - A Company with a Strong Research Foundation

When a new disruptive biotechnology is invented...

Your whole body is made of cells, and redox molecules are native and non-toxic

Build Your Own ASEA Business

In business for yourself, but not by yourself Complete with mentorship

Dig your well before you are thirsty

Q: What does redox mean?
A: The term redox is scientific shorthand for reduction-oxidation reaction, a biologically important electron-transfer reaction that plays a significant support role in many of the body’s life-sustaining processes, notably energy-providing metabolic functions.

Q: What is cell signaling?
A: The healthy upkeep of the body depends on communication between cells in every tissue, organ, and system. This vital intercellular communication ensures that messages are delivered and received to modulate cell production, initiate and sustain repair mechanisms, and perform other restorative processes. The molecules involved in this communication are called cell signaling molecules.

Q: If the body produces redox signaling molecules, why would I need a redox supplement?
A: While most ordinary dietary supplements provide only nutrients the human body does not synthesize, the biological deficiencies caused by aging and cellular breakdown go deeper than just nutrition. As stress, diet, air quality, and other environmental factors cause cellular breakdown over time, the body’s naturally supplied balance of redox signaling molecules is compromised—creating a need for supplemental redox molecules like those found in ASEA REDOX Cell Signaling Supplement.

Q: Is there a connection between redox signaling and gene expression?
A: In 2016, ASEA commissioned a scientific study that used gene expression as the key performance indicator for ASEA REDOX Cell Signaling Supplement. The study found that, over eight weeks, those who drank ASEA REDOX daily experienced a 20–31% beneficial and stable change in gene expression in five genes involved in pathway signaling.

Q: What is gene expression?
A: The nucleus is the cellular “brain,” which holds information about the cell’s specialized function in small segments of DNA called genes. Gene expression is the process by which genetic information is accessed and applied to orchestrate cellular function; without it, cells would be unable to perform life-sustaining tasks. The supplemental redox molecules found in ASEA REDOX Cell Signaling Supplement have been shown to affect genetic expression in a positive way, helping to protect, rejuvenate, and enhance cellular function.

Q: What is pathway signaling?
A: A series of chain reactions (or cascades) initiated by signals at the cellular level cue cellular responses that maintain the balanced biological activity that keeps your body functioning. Signaling pathways guide the progression of these cellular responses, including genetic responses, determining their scope and overall effect in the body. Some pathways are extensive and can influence a wide range of physiological behaviors. For example, the genes affected by ASEA REDOX play a significant role in influencing five key areas of health:

Q: What kind of research has been done on redox signaling?
A: Redox signaling is a maturing area of research within the fields of cell biology and metabolic studies. A peer-reviewed scientific journal dedicated to understanding the vital impact of redox processes on human health and disease was established in 1999. Estimates put the number of peer-reviewed papers on the topic somewhere in the tens of thousands.

Q: When was redox signaling discovered?
A: The discovery and study of human cells began in the 19th century, but it wasn’t until the latter part of 20th century that cells were understood in enough detail to begin observing and theorizing the forms of signaling behind cell activity. By 1999, the role of redox within cell signaling was understood and formalized enough to prompt the creation of a peer-reviewed scientific journal on the topic.

Q: What happened between the discovery of cells and the discovery of cell signaling?
A: The processes of metabolism and cellular respiration saw discoveries in the 1930s and ’40s that illuminated the methods by which the human body uses oxygen and redox processes to fuel vital functions. Research in the 1950s and ’60s provided early clues into the molecular basis of cell signaling, though scientific papers didn’t begin talking about cell signaling as a distinct discipline consistently until the ’80s and ’90s.

Q: How did ASEA develop its proprietary redox signaling technology?
A: ASEA Founder Verdis Norton was first introduced to redox signaling biochemistry while serving on the board of a Utah biotech company. The company’s preliminary work in redox molecule synthesis had produced promising results, but a lack of funds forced them to shelf the project early. Convinced of its breakthrough potential, Verdis and a few close partners pooled resources to acquire the discontinued tech and revive the research. ASEA commissioned its own team of medical professionals, scientists, and engineers to advance the technology, conducting a comprehensive safety analysis and producing a scalable method of production for ASEA REDOX Cell Signaling Supplement and future redox signaling products.

Q: Where are ASEA redox products manufactured?
A: All ASEA redox products are manufactured at the ASEA Redox Center, an FDA-registered, NSF-registered facility located within a mile of ASEA global headquarters in Pleasant Grove, Utah. The ASEA Redox Center is owned and operated by ASEA to meet all FDA Good Manufacturing Practices (GMP). These GMP requirements are listed in Section 8 of NSF/ANSI 173, the only accredited American National Standard in the dietary supplement industry developed in accordance with the FDA’s 21 CFR part 111.

Direct from the Factory 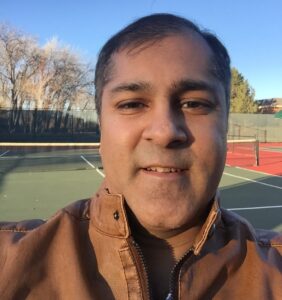 Thank you for visiting my ASEA website! As you review its contents, I hope you get a feel for the groundbreaking products and the lucrative business opportunity that await you at ASEA. While you are welcome to peruse my site, I would also welcome the opportunity to talk to you one-on-one and answer any questions you may have about any aspect of ASEA. Please click on the form below to connect with me. I look forward to speaking with you!
Vesh Thakker, Owner, Lively Signals, Independent ASEA Associate
* Statements made on this website have not been evaluated by the FDA. These products are not intended to diagnose, treat, cure, or prevent any disease. By viewing content on livelysignals.com, you acknowledge that you are accessing media intended only for consumers in the United States of America. 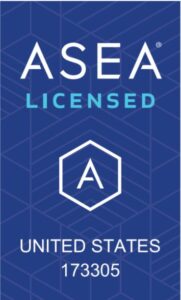 Lively Signals is owned and operated by an Independent ASEA Associate.  Contact me to start your own ASEA business.

Will it help me? As Dr. Vesh Thakker, PhD, MBA.